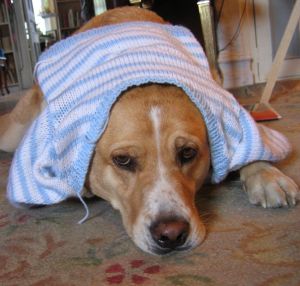 generations of human socialization - for this?

Really, if my brain was switched on common sense would’ve told me that no baby was going to be the right shape for this sweater long before I sewed it together. I didn’t pay attention. This is what happens to the numbers when the observer just isn’t observing. You end up wasting time – making the dog wonder, all those generations of human socialization – for this? He’s a pretty smart dog, but he doesn’t do numbers.

The numbers don’t lie. If your gauge isn’t right the sweater won’t fit. But gauging gauge isn’t an exact science. It’s relative. If you knit when you’re angry the tension in your hands will change and that will make your gauge tighter. If you knit when you’re relaxed then the opposite happens. The numbers don’t lie, but that doesn’t mean that they’re always right either. When you knit you become part of a fluid dynamic between your hands, the yarn, the needle size, rows per inch, stitches per row, and your brain.